Pastor David Tai has a market place call to help the Church rise up as a Kingdom economy – in preparation for the coming Great Tribulation harvest.  He has great passion in helping market place Christians understand their Kingdom destinies, their place in fulfilling the Great Tribulation harvest.  With an engineering background, Pastor David has worked as a market strategist for several technology companies such as Intel and Samsung. Today, he has fully dedicated his career to propagating the Kingdom preparation message and to establishing the market place vehicles that will help build the Kingdom economic network.  Along with his market place pastoral call, David also oversees Villark Ventures, LLC – a company chartered to build strong and godly commercial relationship in the Kingdom economic network.  David holds a MBA and M.S. Engineering from MIT.  He is the blessed husband of Tzu-Ann and a happy father of three girls – Christianna, Jubilee, and Rhema. 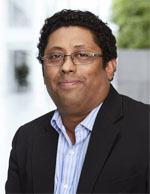 Philip K. Philip is passionate about sharing the love of God and the reality of Christ in the global marketplace. He gives God all the glory for his successful family life, ministry and professional career. He has been married for over 23 years to Betsy Philip and is the proud father of his teenage daughter, Faith Philip.

Philip is a forthright, results-driven business leader with a proven track record of leading marketing, strategy, product management, innovation, operations and general management of fast growing, consumer driven branded businesses in Fortune 500 companies. He has over 20 years of leadership experience having worked for Henkel, The Gillette Company, The Hershey Company and Sears Holdings. He has worked in India, Canada and USA and has had business leadership responsibilities for North America, Europe, Latin America and Asia-Pacific regions. Currently, Philip is the Senior Vice President and Head of Marketing and Product Management for a leading, global automotive accessories company based out of Chicago.

Philip leads United Intercessors Group, a multi-denominational intercessory group. He is the Director for Prison Ministries and Marketplace Evangelism at Living Faith Cathedral Worship Center Church. He is an Evangelist and Mentor at Teen Challenge – a faith based center for men recovering from addictions. In 2018, Philip was appointed as the Pastor for Evangel Indian Church in the west suburban Chicago area.

Elder Fred Lin grew up in Yilan, Taiwan in a traditional family of four generations. During his childhood, he reverently worshiped his ancestors and other gods. In 1971, he was sent to the U.S by his company Sampo to expand its market share and he heard the gospel for the first time. In 1981, he was saved by God’s grace in Los Angeles. For 30 years, because of his career, he served churches in Illinois, Georgia, and Florida, as a deacon. Also, he has participated in local campus and oversea ministries. In 2010, he was ordained as an elder in at the Clearwater Faith Hope Love Church. Since 1989, he has served as chairman and chief executive officer of Payless Car Rental. Since he received the ”workplace is the threshing floor” calling, he has been actively promoting the workplace as a mission field and bringing about company transformation. Not only has he become a good example in his own company,  he is often invited to preach the gospel and share testimonies to encourage believers to obey God, rise and shine in the workplace in order to “glorify God“.

Pastor Ethan Ko has been serving as a pastor in youth ministry for over 25 years all over the US. He is currently raising up next generation leaders through the R180 Ministry.

Joon Hwang was born in Korea, grew up in Canada, and began his children & youth ministry as a college student of Moody Bible Institute in Chicago, IL. After graduating from college, he continued to study (M.Div from the Trinity Evangelical Divinity School & M.A. from the North Park Theological Seminary) and led few youth ministries in the Northwest Suburbs of Chicago. He came to New Life Church as a youth pastor in 2004, became an English Ministry pastor in 2010, and now a lead pastor of New Life Covenant Church since May of 2011. He is ordained in the Evangelical Covenant Church.
Joon loves to meet people, network with pastors and churches, and eat all kinds of food. He also has a burning passion to see the revival and the transformation in the Chicago region. Joon is married to Julie and they have 2 sons and 2 daughter.

Pastor Julie loves teaching kids about Jesus. She encountered God when she was seven years old, and she believes that every child has the capacity of understanding who God is and other important truths. She enjoys engaging with kids about these issues and likes to challenge them to be counter cultural just like Jesus.  Julie is a graduate of Moody Bible Institute,  majoring in Missions and also studied Christian Education.  Her calling is to serve Jesus in anyway or form He calls her to and her mission is to live out for Jesus to the extreme. She sees everything in her life as a training session and an opportunity to be intimate with the Lord. She wants to live it as she teaches her own children and other kids.  Her favorite thing to do personally is writing a journal with a cup of coffee and yummy bread of some sort.

Pastor Julie is married to Pastor Joon Hwang.  They reside in Buffalo Grove and have 4 children – 2 sons and 2 daughters. The whole family loves to go for a drive and then for drinks like coffee or smoothies along with donuts.  They like to play Uno cards after dinner when they find time in-between their busy family and ministry schedule!

Pastor Li-Shang is the English Pastor of Christian Assembly of Suburban Chicago and has been ministering in the church since 1995. His work has been focused on helping the bicultural family overcome barriers it faces (i.e. generational gap, language barriers, cultural differences) and be a witness for Jesus within the community. Pastor Li-Shang’s passion has been to see young people set themselves apart for Jesus and live a life of worship. “You are the Bible that other people read” has been a catch phrase that encompasses what Pastor Li-Shang has been communicating to the church and those he ministers to. Pastor Li-Shang is married to Hyeon Jong and they have four sons.